Yesterday, I spent my day in San Francisco (which happened to be the coldest place in the continental United States, reported by Mike Sugarman of CBS news) surrounded by art and atmosphere.  I visited the de Young and Legion of Honor Fine Arts Museums of San Francisco.  I specifically wanted to view Botticelli to Braque: Masterpieces from the National Galleries of Scotland and High Style which traces the evolution of fashion through a selection of works from the Brooklyn Museum Costume Collection at the Metropolitan Museum of Art, New York.

The 55 masterpieces are by some of the great painters from the Renaissance to the early 20th century, including Botticelli, Velazquez, Gauguin and Picasso.  Two works caught my attention.  The first painting, Japanese Theater ca. 1909 oil on canvas, Ernst Ludwig Kirchner, German, 1880-1938.

“This example of Kirchner’s early Expressionism demonstrates how the worlds of the theater, cabaret, and circus provided rich subject matter for the artist and his peers.  This painting’s exact subject is a matter of ongoing debate, although recent scholarship suggests that it shows Madame Hanako’s troupe at the Central-Theater in Dresden.”

Head of a Woman, ca. 1911  oil on mill board laid on plywood, Alexei von Jawlensky, Russian, 1864-1941. “The majority of Jawlensky’s works are depictions of women’s heads, some of them portraits, and the artist readily acknowledged that he was inspired by the tradition of Russian icon painting.   This picture is not a veritable portrait: the identity of the sitter is unknown, and Jawlensky sought to distill the essence of a head, rather than to capture a physical likeness.  The brash colors and broad brushstrokes are similar to the style promoted by the Fauves, a group that included Andre Derain.” 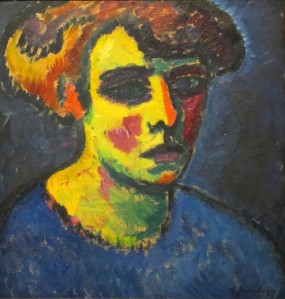 I found my way to the Legion of Honor to visit the restoration of the Salon Dore from the Hotel de La Tremoille, an example of French Neoclassical interior architecture. While meandering through the museum, I learned the Legion of Honor is fortunate to hold the largest group of the Domeniko Theotokopoulis’ (El Greco) paintings on the West Coast. http://legionofhonor.famsf.org/exhibitions/el-greco-legion-honor

El Greco happens to be one of my favorite artists.