In the “Back Room,” my yarn and fabric are co-mingled into an organized system by color, content, weight and gauge.  While knitting, I think about sewing, and while sewing, I think about knitting.  I know many sewists and knitters listen to podcasts, audio books, or stream, but I let my mind wander in silence.

Today, while knitting the cuffs on a cashmere sweater, out of the corner of my eye, three pieces of bark cloth caught my attention, two are vintage and the other a current day piece from Japan. 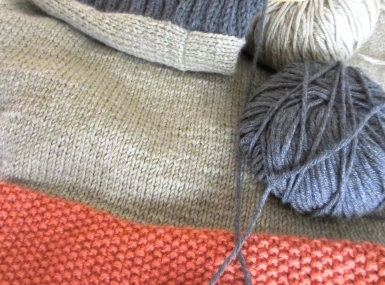 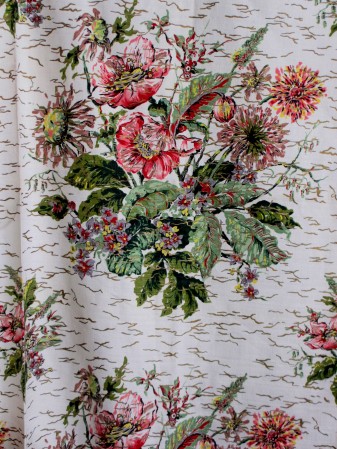 If you haven’t guessed by now, I’m a very curious person.   I like to “fill in the blanks” so to speak, when it comes to the history of things.  And I constantly wonder why I am attracted to a certain style, design, fabric or yarn?  What about the history of bark cloth, and why do I like it?

According to Wikipedia, bark cloth was once common in Asia, Africa and the Pacific.  Bark cloth has been manufactured in Uganda for centuries and is Uganda’s sole representative on the UNESCO Intangible Cultural Heritage Lists.   France produced bark cloth as cotton mixed with rayon in the 1920s and was known as Cretonne.  In the 1930s, the fabric was produced in America and was popular in Hawaii.  Common designs were florals, botanical prints, tropical prints, geometric and abstract atomic era prints.  American bark cloth also shot through with gold lurex threads called Las Vegas cloth, and was a combination of 65% rayon as well as cotton. I remember bark cloth being used in the 1960s for upholstered furniture, curtains and cushions. Along with a rough textured appearance, bark cloth is about the texture of the cloth, rather than the fiber.  It doesn’t have a wale (rib) or distinct weave effect.  Vintage pieces of bark cloth may be found on etsy or ebay.

Today’s densely woven cotton “bark cloth” is named such because it resembles the texture of tree bark and are look-a-likes to the traditional fabrics.

According to Blueprint Africa http://www.blueprintafrica.com/interior/homewares/female-african-textile-designers-not-designing-african-print/  currently, there is a female African Textile Designer, Yemi Awosile (Nigeria/UK), using the bark of the East African fig tree, also known as the Mutuba tree.  Mutaba is harvested every year without felling the tree and has a naturally occurring fibrous structure which resembles woven bast fiber. Her design was exhibited at UNESCO’s Bark Cloth in Manufacturing Architecture, Arts and Design event.

I seek pleasure “filling in the blanks” about the the material I use.  Building a connection and having a relationship with the tangible object I create is an extension of who I am.  How could I throw away a piece of fabric or a skein of yarn I cherish for its unique qualities?  I like bark cloth because of its texture and its resemblance to the bark of a tree, and not having a distinct weave effect creating an uneven texture.  Expanding my knowledge and worldview adds meaning to my life experience.

The most recent concern over man-made fabrics vs. animal or plant based fabrics, cheap fashion and slow fashion are not “new” concepts. Have you ever heard of the Rational Dress Exhibition at Kensington Town Hall in 1883, or the Health Exhibition in London during the Spring of 1884?

At the Rational Dress Exhibition, Liberty’s fabrics were described as,

“Playing an essentially prominent part in connection with Rational and Healthy dress.”  The healthiness of the fabrics came from “their purity, their natural dyes, their unadulterated by any finish or dressing, their freedom from any of the usual processes resorted to in order to impart a meretricious appearance of value to worthless materials.”

For the organizers of the Health Exhibition of 1884, Edward William Godwin wrote a handbook where he pointed out, “Some modification to the Greek costume was perfectly applicable to the British climate if it was worn over a sub-stratum of pure wool, such supplied by Dr. Jaeger under the modern German system, explaining,

Was this the beginning of the end of the corset?

Starting in the 1870’s through the 1880’s, Godwin was associated with Liberty’s.  He designed wallpaper, printed textiles, tiles, “art furniture” or metal work set the tone in houses of those of an artistic and progressive attitude.  Oscar Wilde said, “Godwin was  one of the most artistic spirits of the century.”  In 1884,  Liberty appointed Godwin to supervise the Costume Department. 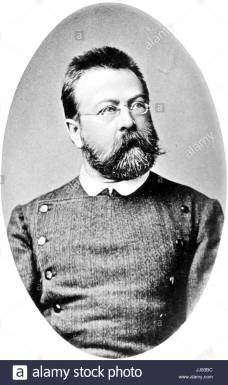 believed wearing  wool “close to the skin,” was healthy.  Jaeger began creating wool suits, around the same time he cut ties with Germany around the start of World War I, and became a British brand.  Long johns were the beginning leading to an established clientele looking for British made garments at a reasonable price.  Jaeger’s branded his fashions with wool and exotic fibers such as cashmere, angora and alpaca.  Jaeger’s yarns are also used by the hand knitter. 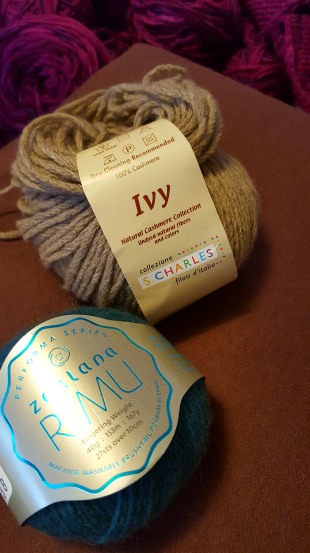 We still have the same concerns of those living in the 1800’s, consider the research expressed by Elizabeth L. Cline, in her book Over-Dressed, page 84, “The production of man-made fibers has doubled over the last 15 years…”  How many of your garments are 100% wool?  Do you recognize the fiber content on your garment labels?  Check out the New York Times T Magazine, dated August 19, 2018 and explore, The Shape of Things to Come, pages 168-177.  A visual commentary on fashion with “voluminous proportions layered for maximal impact.”

(I used Wikipedia and Liberty’s A Biography of a Shop by Alison Adburgham for this blog post.  Photographs have been cited above.)

My introduction to Liberty’s Cotton Tana Lawn began about 35 years ago on a first visit to Britex located in San Francisco, CA.  I was looking for cotton and ended up on the floor with bolts and bolts of italian, swiss and Tana Lawn.  I was mesmerized by the visually stimulating color showcasing the prints of Liberty.   As I slowly caressed the softness of  tana lawn, my love affair with these “art fabrics,” coined by Arthur Lasenby Liberty, began.

While at Britex, an English gentleman named Edward introduced me to the Liberty’s many bolts of art fabrics.  On my return visits to the store, I would look for Edward. Edward educated me on Liberty.  He mentioned, “The original Tana Lawn cotton came from Lake Tana in East Africa.”  The cotton from this region was an ultra-long staple cotton without the use of crease-resistant chemicals or irritating allergens.  On one of my visits, much to my disappointment, Edward was no longer at Britex.  I began researching Liberty and its beginning.

I must digress for a moment…Recently, I’ve discovered Edward disappeared many years ago from Britex because he opened his own store in San Francisco, called Edward’s Unusual Fabrics.  Sadly, Edward has since passed away.  Though his son sold truck loads of fabric to one of my local fabric stores.  The vintage Linton tweed I used for tailoring class last semester, came from Edward’s Unusual Fabrics.  I wear a little piece of Edward’s legacy. 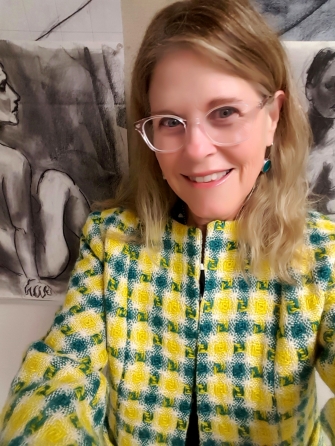 Getting back to Liberty fabrics, I’ve done brief research on a few in my collection.  The information regarding my fabric was found on the Liberty of London website: https://www.libertylondon.com/ 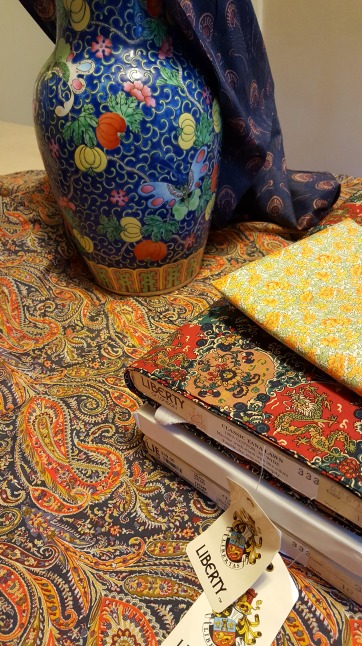 Felix and Isabelle, the paisley print, is derived from a dress fabric design which originally based on an archival paisley shawl drawing, the Felix and Isabelle, print joined the classic Tana Lawn collection in 2013.  The bolt second from the bottom, is Strawberry Thief, printed in Liberty’s Italian Mill.  Strawberry Thief  was first printed by William Morris in 1883.  This print was part of a group incorporating animals with flowers.  Introduced as a furnishing fabric for Liberty in 1979 it depicts birds stealing fruit within Morris’s Oxfordshire garden.  The bolt on top is Dog and Dragon Design, a Liberty block print based on a Chinese design c. 1900.  Still in use, this design was converted to screen printing.  Hera, flowing out of the Chinese vase, given to me by my mother-in-law, named after the Greek goddess associated with peacocks.  The bird feathers were a fashionable Aesthetic Movement motif during the last quarter of the 19th century.

I enjoy learning about Liberty’s history, and the significant part these fabrics played in the history of the visual culture of fashion.  But most of all, the part Edward played in my history.

It’s been awhile since my last post, and I want to start the New Year with an update as to what I’ve been doing for the last few months…

I completed another fashion design course at Canada College located in Redwood City, CA., taught by Professor Ronda Chaney, and assisted by Peggy Perruccio and Kathleen Lorist.  The advanced tailoring class was combined with the beginning tailoring class, a cross-section of students with an array of ability and interests, which created an environment of camaraderie. We learned from each other. 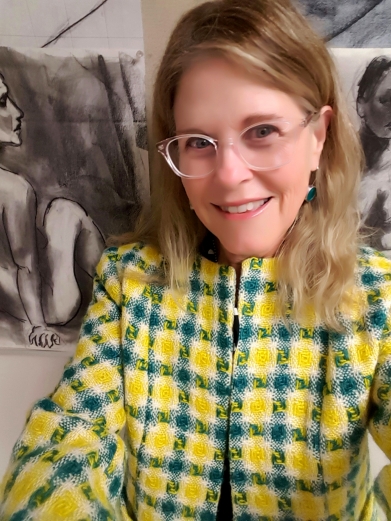 My jacket is a Vogue Pattern, which required minimal fitting adjustments by Ronda.  Matching the plaid with princess seams was the main challenge.  I decided to cut the sleeves and patch pockets on the bias. The fabric is vintage Linton tweed.  Linton is located in the United Kingdom, and was or perhaps still is, one of the major suppliers for Chanel.  I lined the jacket with a designer cut silk charmeuse  purchased at Stonemountain and Daughter in Berkeley, CA. I like using piping as an accent. 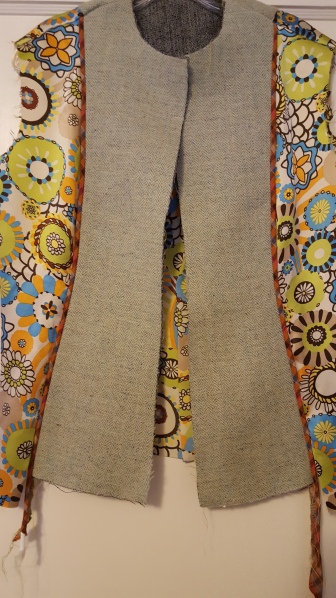 The tweed is loosely woven which created a challenge when it came to the patch pockets.  Trying to get both the same size was not easy.  I solved the problem by blocking both of them on the blocking board I use for knitting. 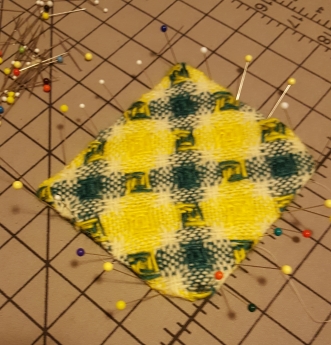 I learned many new skills in this class.  Starting with shoulder pads and sleeve heads, interfacings,  bound buttonhole pocket,  single welt pocket, outside welt pocket, jacket notch collar, and hand stitches.  I particularly like the blind catch stitch for hemming the jacket.  I used a slip stitch for the patch pockets.  I found using the tailor’s ham was beneficial when stitching the hem because it supported and at the same time, elevated the jacket while stitching. 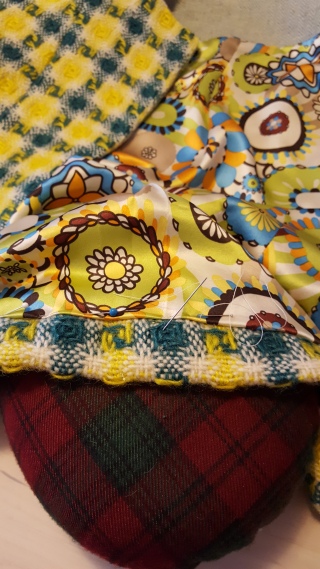 I look forward to blogging with you in 2019! 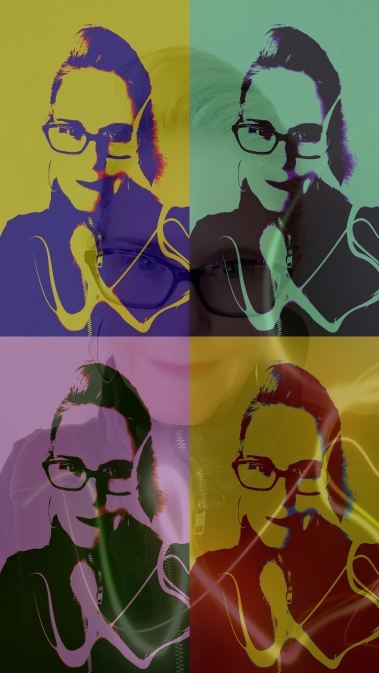